﻿With the opening of the Washington State Library in 1959, artist John W. Elliot was commissioned to create a copper sundial commemorating the history and artistic heritage of the state. The work was repousee (bas relief created by hammering metal from the back side) on a six foot diameter sheet of copper, about the thickness of a penny. It was installed in the common space between the State Library, the Legislative Building and

Over the years, the sundial became worn and damaged. In 2017 the sundial was removed, recast in bronze and replaced.

Whitney Design was hired to photograph the new sundial and incorporate that photo into an accompanying informational sign explaining how to read the sundial. (It’s more complicated than it sounds.) The artwork was for the new sign was prepared, then printed in ceramic on steel. The sign and stand were constructed by Windsor Firesigns.

In the fall, we returned to the State Capitol to photograph the sundial with the installed informational sign.

Every Picture Tells a Story, Donut? 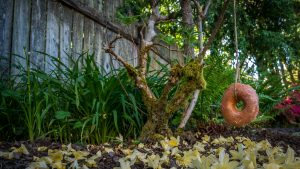